NOTE:  All data graphs, tables and charts were created by the Rye Civic League.  Schedule frameworks are from the budget committee.

The Rye Budget Committee is responsible for establishing each year’s operating budget for the Town, the Water District and the two Precincts: Jenness Beach and Rye Beach. The Rye Library and Cemetery funds are collected by the town but are managed by independent boards.

The Budget Committee consists of six members-at-large, each of whom is elected to a three-year term. The terms of the members-at-large are staggered so that not all are up for re-election the same year. There are also five appointed members, representing the Board of Selectmen, the School Board, the Jenness Beach District, the Rye Water District and the Rye Beach Precinct. There is also an alternate Rye Water District Representative. Residents may contact the Chairman of the Budget Committee or any of the individual members with questions or comments. Contact information for the Budget Committee is available on the Rye website. The Budget Committee meets according to the annual calendar established by the Committee at the beginning of each annual budgeting cycle. That schedule includes budget work sessions, Public Hearings, Quarterly Budget Review of both Town and School Budgets and other meetings based upon forecasted need. The meetings are held in the Court Room at Town Hall, the Town Library or the Rye Junior High School Library. The dates and times of the work sessions and Public Hearings are posted. Each meeting agenda is posted at least a week in advance. The time to get involved in the budget process is early.

Similarly, The Rye School Board establishes the school budget and the Rye Budget Committee reviews the Rye school budget and votes to “recommend” or “not recommend”. The process begins with the school staff requisition for appropriations to be included in the proposed budget. The Building Principals meet with the Superintendent of Schools, Assistant Superintendent, Special Education Director and Business Administrator to review the budgetary requests, including special education appropriations. The administrative team collaboratively prepares the preliminary proposed budget document which is presented to the School Board for its review and vote. The Board also reviews Warrant Articles to determine whether to recommend or not recommend the Articles. The Board also prepares a default budget in accordance with RSA 40:13.

The School Budget Calendar consists of these steps. Citizens can be involved from the beginning phases of this process

Town Government. Table A shows the elements of town government.

The Library is shown on the table but is managed by the elected Library Board of Trustees, separate from the Board of Selectmen.

Some of the components of the town government budgets have fluctuated each year for the past three years, as indicated in Chart  below. 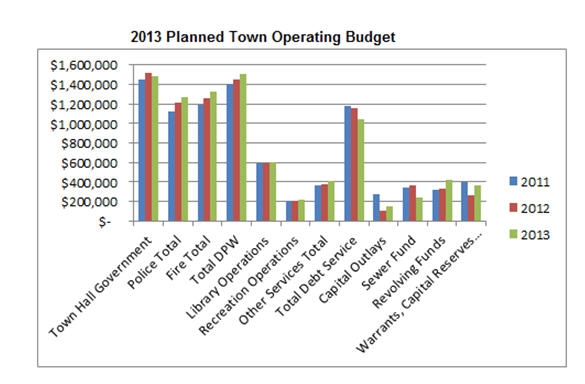 The Rye school expense represents the majority of the investment Rye residents make in local government each year. The school budget was just under thirteen million dollars ($13,000,000) for 2013 while the town government functions totaled approximately eight million seven hundred thousand ($8,700,000).

The Rye School Board is simultaneously responsible for establishing the School Budget, subject to the review and recommendation of the Budget Committee. The State of New Hampshire requires communities to show what they would provide to the State if there were Donor towns. Rye shows what we would provide to the State, but currently no Rye town taxes are sent to the State of New Hampshire. All taxes collected for the Schools stays in Rye. The Town Tax collection system obtains the funds for the schools and allocates them to the School Board to utilize.

Rye Elementary School and Rye Junior High School costs have been stable over the past few years, as indicated in Chart B below.

The same procedure is followed for the Rye School District and the two Beach District budget requests.

The operating budget for the Town is presented to Rye’s voters at the annual Deliberative Session in a Warrant Article whose wording is prescribed by RSA 40:13 XI(c). Any registered voter can offer amendments to the proposed budget amount at that time. Those individual amendments, as reflected in the new proposed budget amount, may be approved or defeated by a majority vote of those present.

For many residents, the County Tax represents 9.5% of their tax bill. If you pay $8,000 in property taxes you are contributing nearly $800 each year for County Government. Our State Representatives are our representatives to Rockingham County government. There are County commissions meetings, open to the public, every other year. If agenda and meeting minutes are available they are not easily found.

Not everyone in Rye is in the Rye Water District. Houses near Portsmouth are on Portsmouth water and other houses near North Hampton are served by Aquarion water. The Rye Tax collection includes the tax for the infrastructure investments of Rye Water. Homes are also issued individual water use charges that are volume based.

Chart C below shows how the rates for 2012 are distributed.

Once a budget is approved by the voters, the Board of Selectmen has the ability to move funds within the budget, so long as the total approved budget amount is not exceeded. That is why the Budget Committee presents a bottom-line figure for the operating budget, rather than specific line-item recommendations, although the Committee reviews every budget line item in every departmental budget and at the Town Budget level before submission of the budget to the voters.

The Table B below shows the different components of the 2013 budget.

A significant part of our town government rate currently relates to debt services for our capital investments. The chart below shows that as old debt is paid off, the town can assume new debt while attempting to minimize sharp increases on the total tax burden for each resident. The process of spreading out this capital improvements budgeting is  monitored  by the Capital Improvements Plan Committee (CIP). 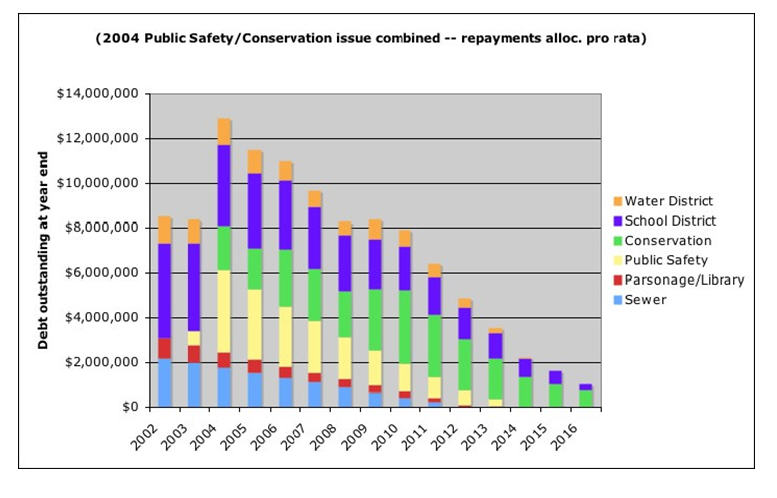